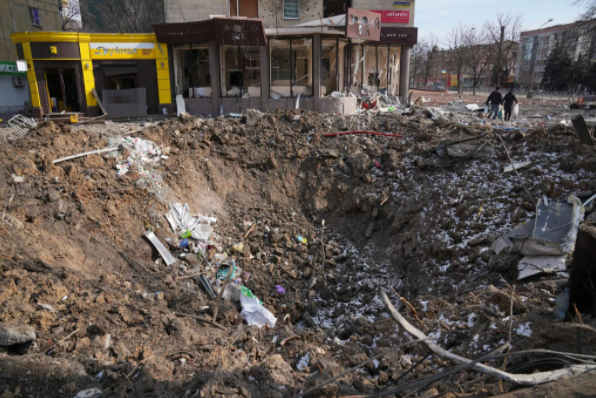 The world is harsh, and this doesn’t require much work to see. Case in point, look at your international news feed.

The people of Ukraine are pitted to survive in a battle of life and death. The survival Ukrainians are now forced to endure is a complex one across physical, emotional, social, spiritual, and mental layers.

Ukrainians’ homes are ransacked, food and water are at best extremely limited and at worst inaccessible, driving has been all but eliminated. People have been separated from their families, may never see friends again, and their way of life has been completely uprooted. The way life exists for Ukrainians may never return to normal for some.

However, Ukrainians must stay optimistic about the fight for their country. You’re probably wondering what herb I’m smoking in making that statement, but that’s exactly what is needed.

Optimism and positivity are not easy commodities to come by amid war, but what we’d like to do below is put out some thoughts out there on what optimism is and how its power can be harnessed across any survival situation. The first step is identifying what are the differences between genuine optimism and seeing silver linings in situations, versus toxic positivity.

What is toxic positivity?

Toxic positivity is insincere optimism. It is a type of optimism which is rooted in fantasy and not reality. You’ve probably heard toxic positivity at some point. One example of toxic positivity which comes directly to my mind are disingenuous corporate rah-rah calls which exude insincerity and promote the idea that employees, the corporate environment, or a campaign it is running is so happy, fun, and gleeful. Cringe.

Toxic positivity can negatively affect whoever it is pointed towards – friends, families, colleagues, and even yourself. This is because toxic positivity diminishes or invalidates feelings like guilt, shame, embarrassment, jealousy, resentment, and other negative emotions.

Feeling negative emotions is part of an authentic human experience – there’s nothing wrong experiencing them from time to time. In addition, if you never feel these emotions, you’re probably practicing some type of toxic positivity and attempting to hide them.

Why would someone have or use toxic positivity?

People use toxic positivity to hide from dealing with raw negative emotion. This only makes the emotion ball up and grow more destructive over time.

Toxic positivity is also commonly used like an advertisement to drum up support for a particular cause or idea, to make it seem like this great thing you need to support. Once you know how to detect toxic positivity, you’ll be able to easily see through the lies and see it for what it is. Empty and devoid of substance.

Be cautious when you read or hear any of the below from someone who is responding to a troubling situation. While there is value in finding a silver lining in situations, there’s a difference between finding a positive outcome when something bad happens versus washing over the entire situation with the façade of everything being fine.

Here are a few common quote examples which often, but not always, indicate toxic positivity:

Most of us have at one time or another, used these lines as advice to themselves or others. While it may seem like we are offering words of support to one in need, instead this invalidates what a person may be feeling and attempt to reduce the importance of a negative situation.

Through the lenses of genuine optimism, there exists an admittance that things may not be going as you want, but there is potential for improvement down the line. Having negative emotions, thoughts, and ideas are part of being human. The world is not always sunshine and roses, and it is important to use words such as painful, tough, or difficult to describe situations.

Even an optimist must admit that the state of the world right now is pitiful; war in Ukraine, a global pandemic lasting two years, inflation at its highest since 1982, a housing market that has made buying a house all but unattainable for most, climate on the rise, and more. Every single day there are more news stories about animals becoming endangered, another ecological disaster happened overseas, or a legislature passing a new draconian measure to limit its people’s freedom.

So, how does one go about being optimistic about the future given all these headwinds? It starts by not forgetting the factors above exist.

Genuine optimism is not about refusing to think about global climate change because it doesn’t directly affect you.

Genuine optimism acknowledges the lack of control over every variable. Things rarely go to plan and whatever idea you had about what the world should be is not much more than a story you’ve told yourself. Genuine optimism is clutching what we know of this world and squeezing whatever colors you can find in a sea of grey.

It is about showing love and support to others, taking action to fight for causes you believe in, and believing your brief presence on this earth is making an impact to someone or something, somewhere.

I believe part of being genuinely optimistic is about acting upon something. There is no better cure for fear than taking initiative and changing what you think needs changing.

Genuine optimism is not about offering “support” to a grieving or depressed loved one that life is not that bad because, “At least you aren’t dead yet.” It is about being supportive, helpful, and offering authentic comfort to one in need.

Some of my favorite examples of genuine optimism come from those who suffered under the Soviet regime, as the government regularly made decisions to sacrifice the lives of its people by rationalizing that it was necessary to preserve the livelihood of the State. For much of the 20th century, there was no hope of that oppression being lifted. That forced Soviets to keep a close grip on genuine optimism to keep hope alive.

In One Day in the Life of Ivan Denisovich, written by the famous Alexander Solzhenitsyn, he describes the perspective of protagonist Ivan Shukhov, a prisoner in a Stalinist work camp (Solzhenitsyn spent time in a work camp himself), whose genuine optimism was on full display, despite a situation which can best be described as dehumanizing:

Shukhov went to sleep fully content. He’d had many strokes of luck that day: they hadn’t put him in the cells; they hadn’t sent his squad to the settlement; he’d swiped a bowl of kasha at dinner; the squad leader had fixed the rates well; he’d built a wall and enjoyed doing it; he’d smuggled that bit of hacksaw blade through; he’d earned a favor from Tsezar that evening; he’d bought that tobacco. And he hadn’t fallen ill. He’d gotten over it. A day without a dark cloud. Almost a happy day.

It takes a significant amount of inner strength to retain this type of optimism given the circumstances, but it’s illuminating and inspiring to read accounts like these. A key to survival while imprisoned in a gulag was to nitpick for silver linings each day in effort to stay motivated in fighting to live. While none of us hope to ever be interned in a gulag, aligning ourselves to the mental habits of looking for positives in life, however small, can serve as invaluable to keeping an optimistic mindset.

On the other hand, we have toxic positivity. As was mentioned previously, toxic positivity is a veil of ignorance over our emotions. Despite everything, whether the Cubs just won the World Series, or the unemployment rate is at 50%, everything is awesome. As all of us know in our core, everything is not always awesome and it’s easy to see the dichotomy in that scenario, although perhaps St. Louis Cardinals fans may disagree.

Toxic positivity is also a self-fulfilling prophecy. By avoiding thoughts or experiences we perceive as negative we’re compounding those into even more formidable beasts by not validating them. A woman who overlooks her husband’s infidelity and buries dealing with the issue, communicating her disagreement, or her emotional reaction to it will cause her husband to continue the infidelity. It’ll only prolong or magnify the effects.

It’s easiest to find toxic positivity on Facebook, Instagram, or other social media platforms. Relative to the number of posts and pictures you see framing lives in a way that shows people in their best light, you rarely (if ever) see the actual, real side of that.

Rarely will you see the empty nester parent posting about a flare-up of loneliness or emotional distance from her spouse after years of raising their children. Instead, you’ll see a post about vacationing in Cancun with a margarita and beach view.

You won’t see the late-20s girl who has no idea what to do with her life once the effects of age reveal itself. Instead, you’ll see her taking selfies with a cute smile as the light perfectly accentuates her facial attributes and a pose that makes her look fit and slimming.

The guy who just posted a great picture of him and his friends with beers on St. Patrick’s Day? You’re not going to hear the conversation they had later, which that same guy was just admitting he spent 22 years with his wife without ever loving her.

It’s easy for keyboard warriors to suggest what actions Ukrainians should take during war – how they should fight, where they should go, how they can survive – in reality, this serves little value. It’s up to Ukrainians to find the silver lining in each day, which in theory is no different than each of us, or anyone else, for that matter.

One of my favorite quotes of all time is by Margaret Thatcher. It also encapsulates why finding the silver lining in life is so critical:

Our minds blaze the trails for which our bodies follow. Keep your thoughts full of hope but not blind faith, that a better future is on the horizon and beyond the fog of war lies a life full of life, liberty, and good fortune.

At the end of the day, it comes down to accepting difficult emotions from time to time, understanding why they occur and why we experience them, and know it is not the last time we will experience them. But despite how gloomy the outlook may be, you can find one or a few good things in this world to give you a sense of happiness and hope for the future.

Improve your survivability with Misogi

Try out these mental challenges as part of your survival training. Using Mysogi, know how you’ll mentally handle a survival situation before experiencing it.

What is your Coping Mechanism?

Learn about how you cope with problems and assess whether your coping strategy(ies) are healthy, unhealthy, and tips to improve.

Why Vinegar is a Bug Out Essential

Your BOB should include versatile tools that provide extreme utility under extreme circumstances. Once of those is vinegar, and you will see why.